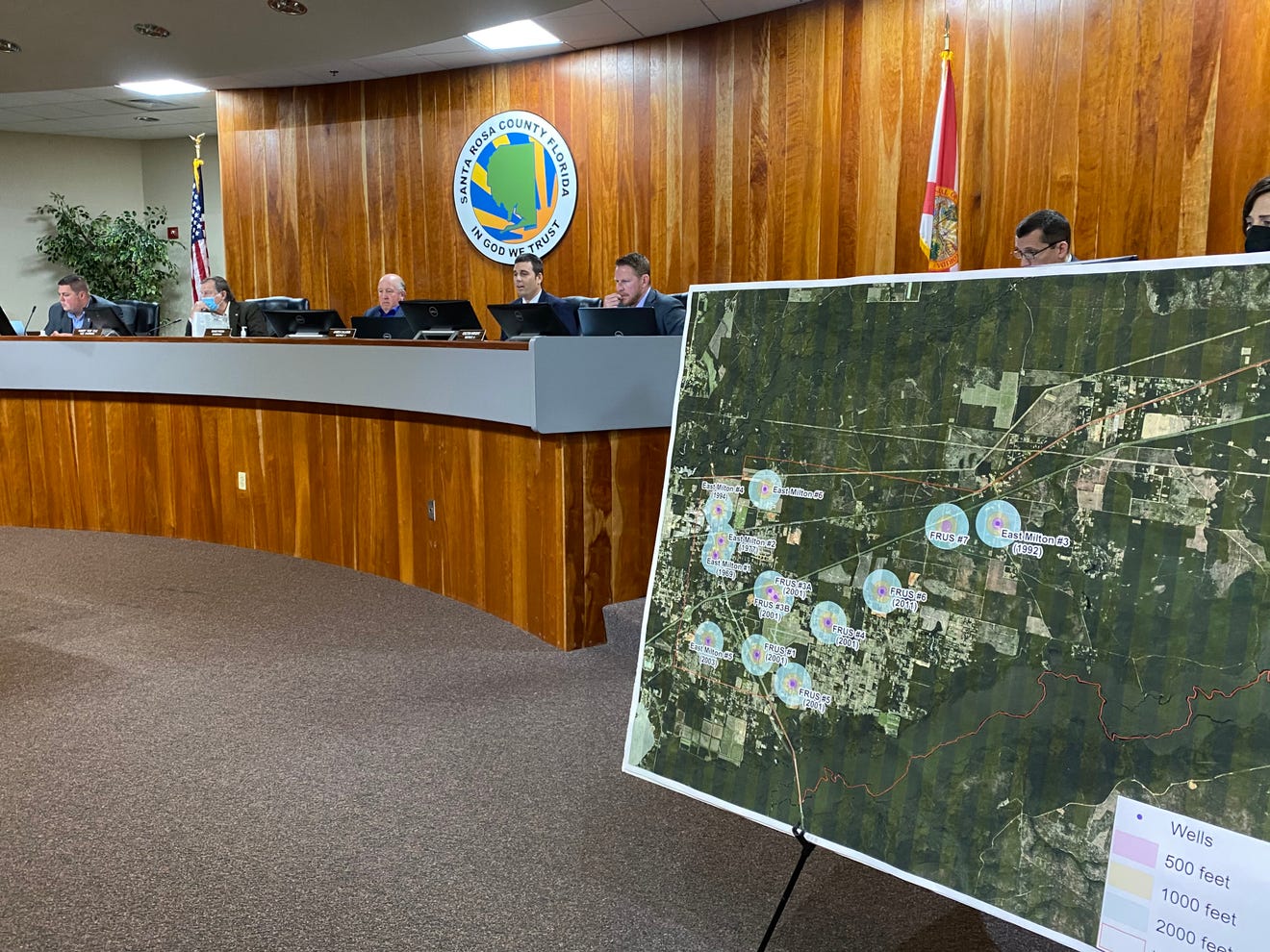 In a marked change of tone, Santa Rosa County commissioners are softening their stance on retracting critical drinking water protections in the East Milton wellfield protection area following weeks of public outcry over the potential threat to the drinking water supply for more than 86,000 residents.

At a public agenda workshop Tuesday morning, commissioners said they would scrap plans to remove seven words from the county’s comprehensive plan, a move that would have allowed borrow pits to expand in the protected wellfield zone.

District 2 Commissioner Bob Cole even went as far as to admit he made a “mistake” when he was one of the three north end commissioners to vote initially to repeal the language in December.

“Being on the board when we voted to strike this language, I think we went about it the wrong way,” Cole said. “We should have looked to enhance and get a balance rather than just strike the language. I’ve never been too big a boy to admit when I may have made a mistake, to open that can of worms like that, but on the same token I’m interested in property rights of people that expected to be able to use their property as they see fit.”

In December, Cole, along with Commissioners James Calkins and Sam Parker, approved striking language from the comprehensive plan that would have allowed borrow pits to expand in an area that has been under a protected overlay district for almost a decade. Commissioners Dave Piech and Colten Wright dissented.

The Florida Department of Environmental Protection and Northwest Florida Water Management District sent back comments to the county saying there wasn’t enough data and analysis to support changing the plan. In other words, more scientific research needs to be performed to make sure that allowing the borrow pits to expand won’t harm the underground gravel aquifers that supply drinking water to the entire central and south end of the county — something citizens, attorneys and local water utilities have been warning the board about since the December vote.

“I can tell you that based on the precedence of some of the surrounding counties, when I hear the lack of data and analysis, as your planning director, I have concerns,” said the county’s planning and zoning director, Shawn Ward. “I have to be able to provide the state with the data and analysis to amend this proposed ordinance as it is in the comprehensive plan.”

Due to procedural rules, the commissioners are required to vote on the comprehensive plan change at their Feb. 25 voting meeting since it has been previously advertised as a public hearing, but all commissioners indicated Tuesday that they would vote to not to approve the change.

The commissioners said they still intend to find a way to “compromise” by allowing pits to expand or multiply while still protecting drinking water, possibly even by expanding the protective overlay district and working with Okaloosa County to perform data and analysis on the effects of the below-ground aquifers.

The borrow pits provide dirt for construction projects like roads, homes and shopping centers — all things going up quickly in fast-growing Santa Rosa.

Commissioners said they intend to spend the next several weeks finding ways to complete the needed scientific research before coming back with a new proposed change to the comprehensive plan.

Wright, who questioned back in December why the board was even considering rescinding drinking water protections given the potential implications to the groundwater, said Tuesday that he would never support rolling back protective drinking water regulations.

“This could be the single most important thing that any of us do,” said Wright, who represents District 5. “It affects the lives of people 200 to 300 years from now, when we’re all gone and the worms have eaten us. I’m not an environmental whack job. I’m just as Republican and conservative as it comes, but I think we need to remember the Republican Party is the party of conservation. They started the National Park Service. And this is important, and the only way I support anything is if we enhance protections.”

The board will have a final vote on the issue, which it’s expected to vote down, at its Feb. 25 special rezoning meeting, which begins at 6 p.m.